You will need to get a Sterling (British) Bank Account. Shop around for the bank that suits your needs the best.  I personally recommend looking off-base. Also there have been rumors that having an international account can ruin your security clearance. This is untrue. I can say that I received a high security clearance after separating and I had lived here for 3 years and having my account off-base for the entire time. A few banks are Barclays, HSBC, NatWest and Lloyds. The banks in the immediate local area are more likely to allow you to set up an account without an utility bill as they deal with U.S. military more often than in some of the villages and towns further away. Beware though, you often have to make an appointment to set this up.

It is best to withdraw pounds off-base than on-base and here is an explanation why. In short, it will save you money. On April 13, 2015, the U.S. dollar could buy £0.6667 at the Community Bank, where the one quoted on CNN’s World Currencies, quoted £0.6834.   I know it is only a £0.0167 difference but when you are exchanging £1,000 a month for rent and other costs, it comes to a difference of £16.70. So if you are doing that every month, in a year, you could be throwing away, £200.40 (or $293.23)! Originally when I wrote about the difference withdrawing of money on-base or off-base, I was contacted personally by Community Bank to remove this, even though it was true. I met the Area manager of Community Bank and he admitted that it was more than off-base but that it was included in the consideration of the COLA. So save yourself some money and withdraw your money off-base and your bank will charge you the best rate for the day. You should also check if your bank will waiver 1% conversion fee during your tour over here. Community Bank generally sneak this rate in without telling you and they say they do not ‘charge’ you but they do not give you the best exchange rate of the day.

You can set up direct debits to pay your English bills so you don’t have to send out checks every month. Another reason to set up a British bank account because they have chip and pin and a lot of places do not accept the swipe card. When I was in, I would go to my British Bank on payday, withdraw the amount of money I needed and walked up to the counter and deposited it in my British Bank account. You may have to write a letter to your U.S. bank to increase the daily amount that you can withdraw for the length of your tour. This was the easiest way to transfer money because the U.S. and U.K. banking systems are different and it is difficult to transfer money between them.

Another easy way to transfer money is using Transferwise. It takes about 3-4 days but once it set up, it is very easy to do.

There are some things that you might need to know to avoid frustration.  A ‘sort code’ is the equivalent to our routing number. It usually consists of 6 numbers and looks like this 12-34-56. It generally takes 4 days for a check to clear. You cannot take a check to the bank that it is issued from and get it cashed. You can deposit a check addressed to someone else into their account if you have their bank details. 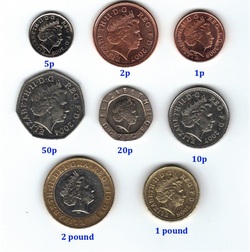 Smaller shops may not accept notes larger than £20 and in order to avoid drawing attention to yourself, carry small denomination notes. Also some shops may require a minimum charge of £5 when using a debit/credit card. It is becoming increasingly rare that a card without a chip and pin is accepted. Also some shops do not accept cards that say "see ID".

Keep on top of the exchange rates on the AAFES website; you can have a weekly email sent out to let you know the current rate.

When writing a check (cheque in England), the pounds and pence are written out as on an American check but at the end put “only” and a line as seen in picture.

Cashing in your change 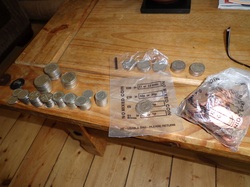 You can go to the bank to to get little bags for coins. On the bags they state how much per each coin you need to put into the bag. You can only put one sort of coin in the bag and not a mixture. It says £1 or £2 but you cannot mix the coins you have to do it in all one coin type.

My bank has recently installed machines where you dump in the coins and then they deposit the amount in your account.

There are also Coinstars in some supermarkets. The closest one to the bases are at the Sainsbury in Mildenhall.