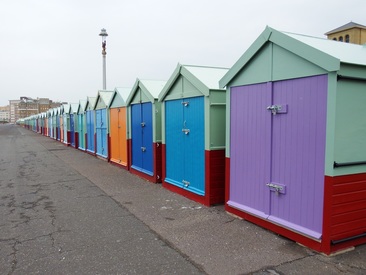 As my time to return to work is creeping up on me, I decided that Bug and I would take a mini vacation to Brighton to visit a friend of mine who had a baby a few months ago and see what made her leave Cambridge. This is the benefit of living here so long, you end up knowing people all over the place.

I planned to leave Cambridge during Bug’s first nap so that she would be asleep for most of the way. In total, it only took me 2.5 hours from my house to get to Brighton. This may be because I was not traveling in peak hours, there weren’t any accidents and it was half term.  But on the way back, there was a lot of traffic and it took me over 3 hours.
Driving from Cambridge, you do cross the Dartford Crossing and pay a toll. You can do this online or by phone. You have 24 hours from when you cross but best to do it before hand.

Brighton became popular in the mid-18th century when sea bathing became popular. It is very close to London compared to other beaches. But don’t head here if you are dreaming about building sandcastles, it is a stony beach. I came here in October but I think it is enjoyable anytime of the year. Obviously, the warmer the weather the more busy Brighton will be.

Just Park is a great way to find a place to park in cities like Brighton and Cambridge for less. I stupidly thought when I went to Brighton that I would just ask the hotel where to park when I got  there but the closest car park cost £18 per day! One of the places where you have to prebook was fullbut recommended that I look up on Just Park and I am glad I did. Instead of paying £22 per day at the parking garage at the Hilton hotel, I paid £33.30 for 4 days.

I am not overly picky about hotels because for most of my trips I just return at night to sleep. I chose to stay at The Beach Hotel off the Regency Square and conveniently located next to the Brighton i360 which just opened in August 2016.

The Beach Hotel was lovely. The room was perfect for Bug and I. One thing I like about older hotels is the quirkiness. I once remember staying in a hotel in Aldeburgh which you had to go up and down several flights of stairs to get to our room. The room was nice an spacious and Bug liked practicing her walking going in and out of the bathroom and bedroom. Our room was on the fourth floor overlooking Regency Square and I could see the i360 from our windows.

The breakfast was a full English breakfast served from 8-10am which was perfect for us. We would be there first thing and then set off for our day.

The hotel didn’t have wifi but I was close enough to the i360 to pick up theirs. I would just load up the pictures I wanted to when I was nearby since I was running low on data. Sometimes being unconnected is a good thing. 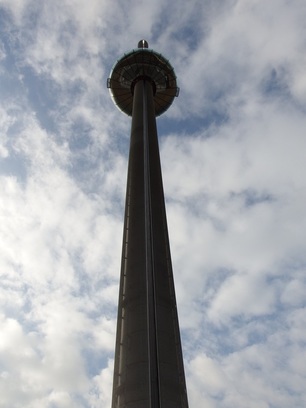 I got the new joint pass which allows you a i360 flight and entrance to the Royal Pavillion and SeaLife. It saves you £13 when booking it this way and you have 7 days to enter the other places from your ‘flight’. We had our flight on the i360 in the morning. It was a great way to see the coast of Brighton, the city centre and the South Downs. You can take your buggy with you and drink a bit of fizz at 173.45m above sea level. 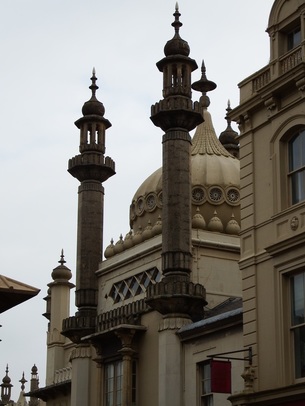 The Royal Pavillion was built in 1823 by John Nash. King George IV secretly married the Catholic widow, Mrs Fitzherbert in 1785 and they would spend time together in Brighton. He was officially married to Caroline of Brunswick in 1795.

King George was known for his parties so since the parties got bigger, he needed more space. This palace is Indian inspired and may be one of the most beautiful buildings I have ever seen. Looking at the outside of the building, I was not sure what to expect. But once I walked inside, my jaw dropped. It was room after room of elaborate decorations. It is a must see if you in Brighton. 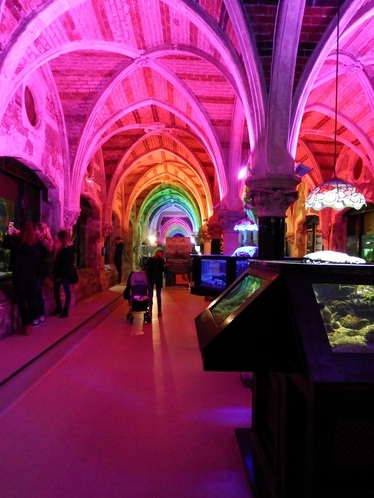 Sea Life is located near the Brighton Pier. It is in the location of the world’s oldest operating aquarium which was built in 1872. The displays are fantastic with the 3,500 fish, turtles and sharks. There are also things for you to touch. There is a Harvester nearby so stop for a bit of lunch and spend your afternoon looking at the fish! 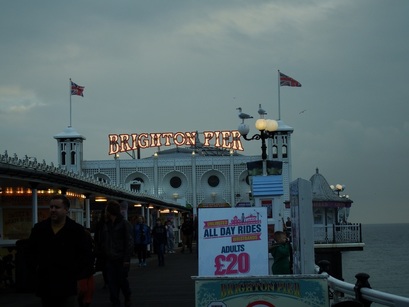 Brighton Pier is a typical Victorian seaside pier with games, rides and arcades.