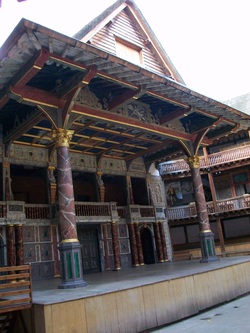 Shakespeare's Globe is something that you can walk by on the River Thames but you will never get the full effect unless you take the tour, which I recommend.

One of the most interesting facts that I find interesting is that the founder is American Sam Wanamaker. He died before the Globe was completed.

The Globe you see today is not the original but they have done painstaking research to ensure that it is fashioned as the Globe was. The original was destroyed in a fire from a performance.

It has steep seating in 3 rows with room for people to stand in the centre under the sky (it is not fully enclosed.) There are no spotlights, microphones and the music is played on instruments from the time. It is the only thatched rooftop in London allowed after the Great Fire in London 1666.

You can also go to performances. Plays usually take place between May and September but tours are all year round.

To visit or not to visit, that is the question.... 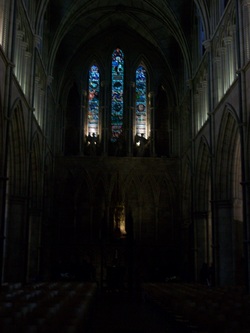 Southwark Cathedral is in the bankside of London and is London's oldest Gothic churches. If you have a London Pass, you will get a free guide book to help your visit there. This is one of only three surviving churches of the great monasteries from the reformation. It was given Cathedral status in 1905. There are still remains of the Norman priory that was once here.

John Harvard, founder of Harvard University, was baptised here. It has a memorial to William Shakespeare and his brother is buried here.

If you love the architecture like I do, its a nice place to visit. 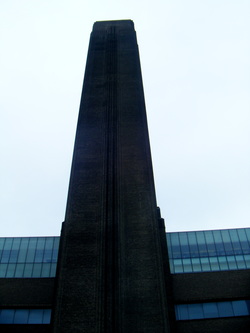 The Tate Modern is located on the south bank of the River Thames right next to the Millennium Bridge. It is a gallery showing international modern and contemporary art. It is built in what used to be a power station and was opened in 2000. It shows art after the 1900s because the National Gallery and the V & A Museum show pre-1900 art. It belongs to a group of Tate Galleries.

I like to pop in the Tate Modern not only because it is free but sometimes they have very interesting exhibitions (some of the major ones are not free). Once there were slides in here which were fun. So if you are in the area see what they have to offer.