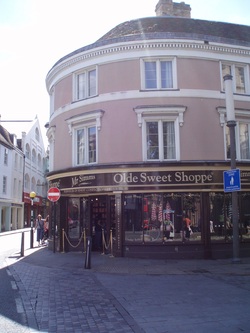 You know that the British are in love with their sweets, you can see this by the aisles dedicated to them in the grocery stores.

One of the favourites are known as hard boiled sweets. They are hard candies and come in a wide range of flavours such as rhubarb and custard (my favourite) and dandelion and burdock. They even have some that you can have when you have a cold that will unplug your nose! 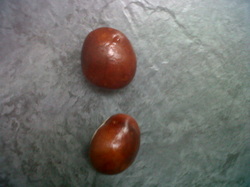 Conkers are horse chestnuts but as with many things there is a history with these oval nuts you will see due to autumn arriving.

Children used to play a game with the conkers by drilling a hole in them and putting a string through the conker. The game is played between two people and each person takes turns to hit the other person's conker trying to crack it. Who ever cracks the others conker wins!

Now schools have discouraged children playing this game and even provided safety goggles if they do allow it.

There is even a World's Conker Championship in Northamptonshire. 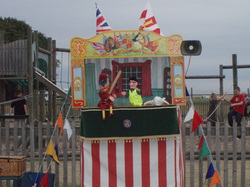 The show is run with on puppeteer and has a series of short screens. The show comes from Italy and dates backs from the 16th century but was first recorded to have been in England in May 9, 1662 (Punch’s birthday).

Punch wears a brightly colored jester’s outfit. Punch is a hunchback with a hooked nose that almost meets his prominent chin. He carries a stick that he uses on the most of the other characters at his free will.

The original target audience were adults but then evolved into children’s entertainment.

Here is a playful but informative website dedicated to Punch and Judy.