Holborn and The Inns of Court 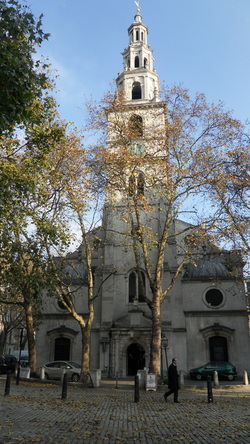 St Clements Danes is the RAF’s central Church located right outside Royal Courts of Justice on the Strand. It is a very beautiful church that is in the centre of the road.

There have been churches on this location for over 1,000. The one before this one survived the London fire of 1666 but was rebuilt in 1681 by Sir Christopher Wren (designer of St Paul's Cathedral and the library at Trinity college).  The steeple was was added in 1719.

The inside of the Church was burnt out om 10 May 1941 by incendiary bombs, leaving only the walls and tower. So in 1958 it was rebuilt and commemorates the RAF personnel who have died whilst on active service.

I wanted to make this trip because Jane was the second baby to be baptised after it reopened after the war in 1958. So it was a very personal trip.

The church is very serene as you would expect. The floor is very white and there is the RAF crest surround by the commonwealth air forces. There are also 1,000 squadron and unit badges carved in Welsh slate. The benches are on rollers so that they can be pushed in and out to accommodate the services held here.

There were a lot of donations made to this church from organisations, air forces around the world and the RAF. Some were memorials to those that have died. You can see how much this church has meant to so many.

You will like to know that under the West Gallery, there are the names of the 16,000 USAF who died in WWII. The organ was gifted to the church by the USAF and is supposed to be the best one in London. 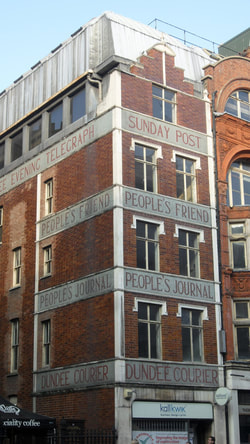 The first printing press for England was setup here in the late 15th century.

Since then this has been the hub for London's publishing industry.

Shakespeare and Ben Johnson have frequented the old Mitre Tavern (no 37).

Printing stopped here in 1987 when new technology came in.

El Vino in the area was once a watering hole for local journalists and lawyers. 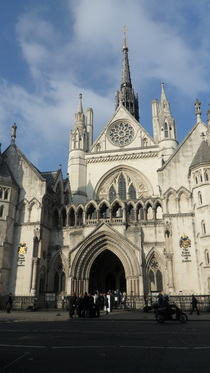 Royal Courts of Justice are also known as the Law Courts and if you watch the British news when there are big cases going through the courts this is the place that it is usually being held. They hold criminal and civil cases here.

It is located off the Strand in the City of Westminster in London. You can sit in a case but it depends on the nature of the case being held. The complex is open to the public over the age of 14 unless it says unless there is a notice on the doors saying 'In Camera' or 'In Private'.

There is a self guided pamphlet to guide yourself. I would not suggest going here during the Christmas break as no cases will be going on. It is said to have 1,000 rooms and 3.5 miles of halls.

They also have public tours, please go to the website for more information. 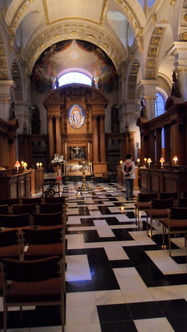 St Brides Church is known as the journalist church. You can see its Wren steeple from St Paul's and it is very modern compared to what you would expect. This is because it was damaged during the war. The steeple was the inspiration for the first wedding cake.

It is free to enter and has a great exhibition in the crypt!  Also it was the first time Jane had seen an iron casket. Look out for the seats sponsored by the newspapers! 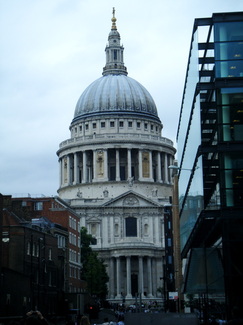 Every American should visit this beautiful place at least once while you are here. I have been to St Paul's 3 times already in my 6 years here.

The best view of London in from the top of the dome. Although climbing the 528 steps is not for the fainthearted but don't despair, there are several places to stops, such as the Whispering Gallery and the Stone Gallery before reaching the Golden Gallery's amazing views.

They have an American Memorial Chapel as a way of saying thanks for our help during the war. Winston Churchill ensured that during the war, that if everything else was bombed, he wanted St Paul's to be protected so he had people stationed there to put out any fires that began. It escaped any major bomb damage and was hit by 28 bombs.

It is also the place where Diana and Charles married in 1981.

The crypt is very interesting as well, it hosts the body of Admiral Lord Nelson (the guy on top of the statue in Trafalgar Square).

I find the architecture breathtaking and will continue to go again and again. The current cathedral was built between 1675 and 1710 and is the fourth to be on this place the first was built in 604.

You can get in free if you attend a service and the church does shut for the services. It also closes early so do check the times before you go there. I hope you enjoy it as much as I do. You can also get in on the London Pass. 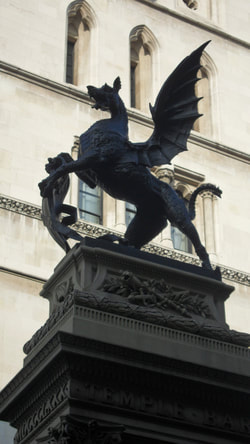 This is a memorial to entry of the city of London. There once was an arch that was built by Wren which stood here. It was customary that the monarch would ask permission of the Lord Mayor to enter the city. 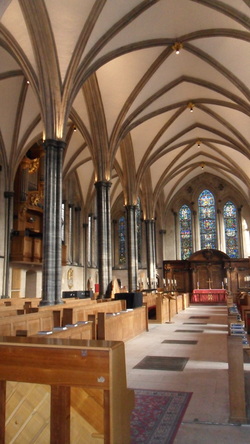 Temple Church is a medieval church built in London. This is the second of the four round churches that I have seen. It was built in 1185 by the Knights of Templar. It is famous for the round church and its effigies.

The church lies off the beaten track in central London. It featured in both the Da Vinci Code movie and novel.

There is a small fee to see this church but it is very beautiful. 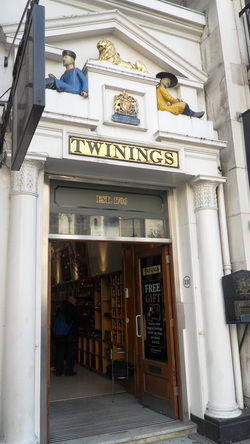 You might have heard of Twinings the tea. The first Twinings tea shop is located in London's Strand. Thomas Twining began selling his tea in 1706 when coffee was all the rage.

He chose his logo in 1787 and is the oldest commercial logo still in use.

They sell over 100 blends and their English Breakfast tea was developed for Red Cross food parcels.

Pop in if you are in the area and the staff can help you find the tea for you.