Originally I wanted to surprise Mr B with a trip to Iceland to see the Northern Lights for his 40th birthday. But the more I looked into it, we needed more time and he had certain ideas that I hadn't thought about so we abandoned that idea.

Then I decided that we would headed to Lapland, which is where Father Christmas (Santa to us Americans) for an amazing trip where we can see the Northern Lights and the magic of Christmas.

When I looked into the trip, I had seen costs being about £5k for a trip like this. I was determined to do my homework so we could go this trip at a fraction of the cost.

We did have a few days that we just hung around the house we were staying. We did head into Rovaniemi and had a wander and ate at Frans and Cherie.

​There is a Lapland Chatroom which has great information. 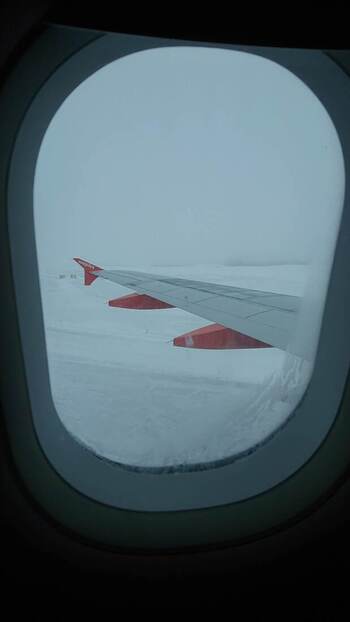 There are various flights that can get you to Rovaniemi, most are not direct and not cheap but I found out that EasyJet flies in and out Wednesdays and Sundays. These flights were direct from London Gatwick and cheaper than the other options. The flight schedule opens up until March the following year in early April. So on the day it opened I booked my tickets at 6 am.  We paid £55 out and £99 return per person. A few hours later when I looked to write this up the outbound had gone up to £140 and return £206. So I have learned it does pay to book early! We decided to stay a week because when I added up the difference in the flight tickets and accommodation, it was £200 cheaper to stay. Also flying in on Sunday and leaving Wed or vice versa felt too short.

The EasyJet flight is very early out of Gatwick so we decided to say at a Premier Inn nearby for only £29 (free parking). The flight is at 6:30 am so would have to be there for 4 am so leave around 2 am- no thank you!

I also booked our parking at Gatwick Airport for £57 for the entire time. 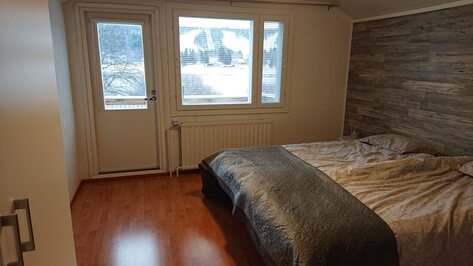 We decided to go with an AirBandB property so we could feel at home since we were going to be away over the Christmas/New Year break. This cost us £1310 for a week.

We used the Bus 8 most of the time as we were staying here the line.

There is a taxi app but we could not get it to work for us. We only used the taxi to and from the airport and on the night we went on the Northern Lights Sleigh Ride.

We were self catering so we went to the local stores that were nearby for food. I was pleased to see vegan items available as I have a cow's milk allergy.

Only low alcohol items can be bought in the grocery stores. Also trade in your cans and bottles for money off your next shop. It adds up quickly.

We packed too much like everyone but this is a list of what we did bring and use. This seems to be a common question that comes up in the fb groups I was in. We had a washing machine which we ran once.

I thought we would only spend one day here but because Bug loved the snow so much, it took forever to get from one place to another.​

​We ate at the Loft Cafe and Café-Restaurant Napatapuli especially if you want to try reindeer. 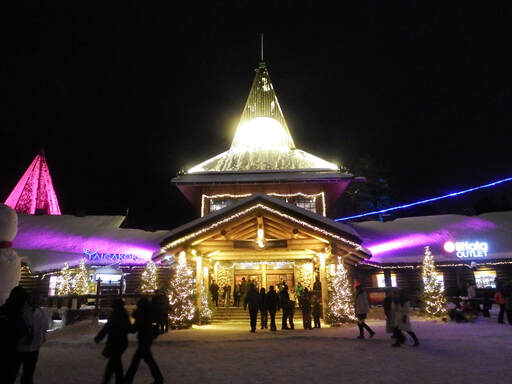 We saw Santa first thing because the queues get long. We got there about 10 am and only waited 30 minutes.

This is free to do but you have to pay if you want a copy of the pictures. you can also buy a present for Santa give to your child just before going in. I got worried I missed it.

​I have been told that this Santa is much better than the one in the Christmas House. 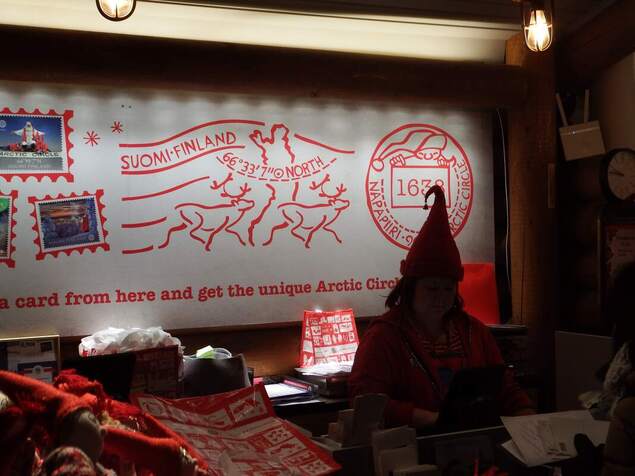 You can sign up for a letter to be sent to the child for the following Christmas.

Also a good place to purchase postcards and post in letterbox to get Arctic Circle stamp. 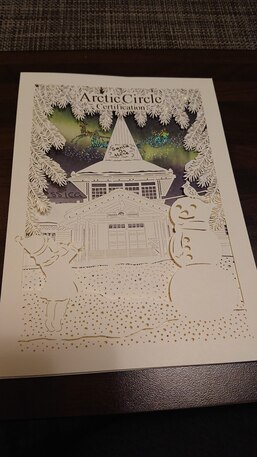 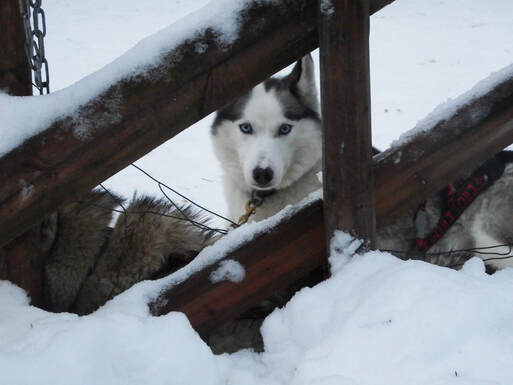 We went to see the Huskies. The lady who we rented our place from said that this one was the better of the two places to go as the other ones were American huskies.

When you pay the entrance fee, you get a 500m taster ride as well. You can pay for a longer ride but we just did the taster. bug loved it!

No need to book ahead unless you want longer rides. 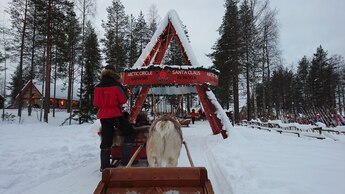 We did the forest path reindeer ride. No need to book, just show up. Any longer distances do need to be booked beforehand.

​There is also a place to roast your marshmallows here too. 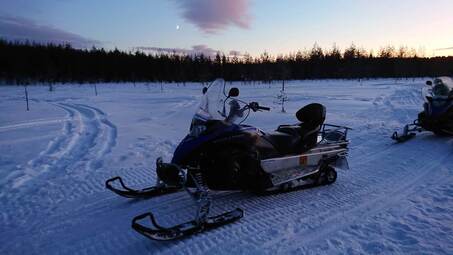 We prebooked an hour snowmobile ride. Bug rode in the sleigh behind the instructor and loved it! We had a stop halfway. they gave us everything that we needed for the ride. 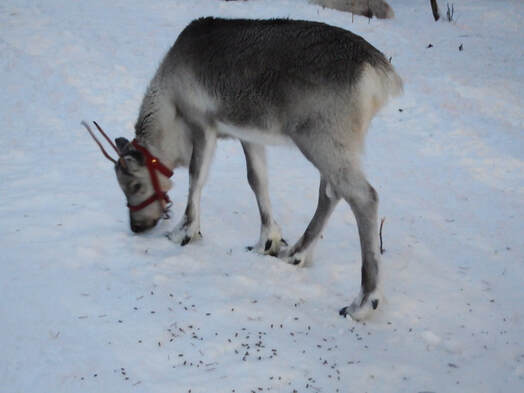 We spent a lot of time here. Not because of the animals but they had a great hill to sled down and you can have a go at cross country skiing. Bug really stuck with it despite falling a lot so that made be think a day at the slopes would be a good thing!

Bring your marshmallows to toast!

There were high chances of seeing the Northern Lights so we struggled and found a Northern Lights Sleigh Ride. It was a great ride but sadly didn't find any. I don't think any one saw them that night except people who were more north than we were. The last night we were there, Mr B caught a glimpse of them, which was great!

They also gave us all the equipment we needed to keep warm. 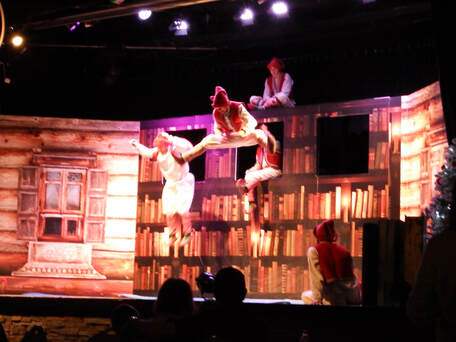 SantaPark is an amusement park. It was very nice and Bug really liked this place. There was an Elf show, Elf training workshop, biscuit decorating (not included in the price), Santa, craft table, ice sculptures, post office (not included in price) and train ride.

I felt it was expensive for what it was. I would suggest bring your own lunch.

Also a great option if the weather is bad but it isn't a must of you are going to Santa Claus Village. 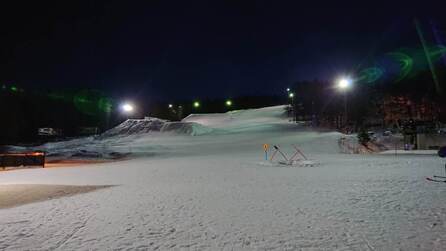 This was only a 30 minute walk from where we were staying.

Bug and I practiced skiing in Rendi's Snow World. We just went up and down with her between my legs. Ticket is for all day.

Mr B got a few hours ticket and he went on a few runs and then swapped with me and did the tubing in Rendi's world. He was snowboarding so he couldn't teach Bug.