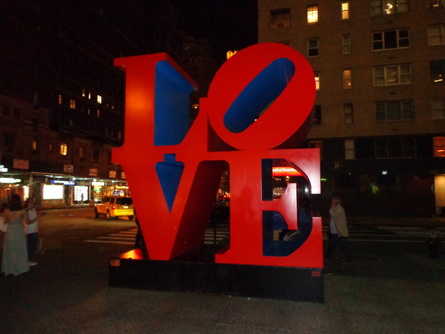 New York City is a place that everyone should go once in their life. It is the setting for many TV and movies and is a world unlike any other.

Mr B and I went here as we were visiting family in Maine and thought we would tie them into together. Despite the great location of our hotel, I was not please at all with it so I will not recommend it to you.

The subway is a main way of travel for most people living in NYC but if you are a tourist, do not expect it to be as easy to use as the tube is in London. There are no maps at the platforms to reassure you that you are at the right place so you need to look on your map to know which direction your train is going to. The reason being is there are several trains at the platform going different directions. The one thing I did like which is better for social equality is that no matter where you are travelling to, a ride costs $2.50. Also you can use the same Metrocard (you just pass it through the gate) for two passengers or more unlike the Oyster card which everyone has to have their own.

The train from the airport to NYC is very straight forward. You use the AirTrain to get to one of the train stations (free from the airport but $5 to the airport). Then you get on the subway to where ever you are going. 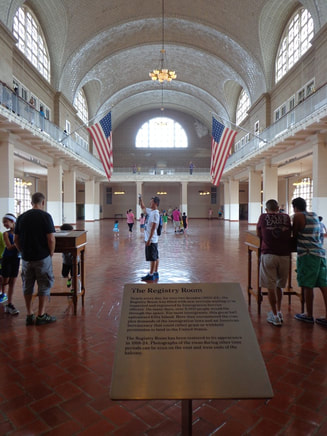 I think that a trip to Ellis Island is a must for all Americans. It reminds that we are a nation of immigrants. This was a point of contact for immigrants coming in from 1892-1954. The museum does a very good job with its presentation to give you an idea of what the people who passed through here had to go through.  This can be tied into a visit to the Statue of Liberty 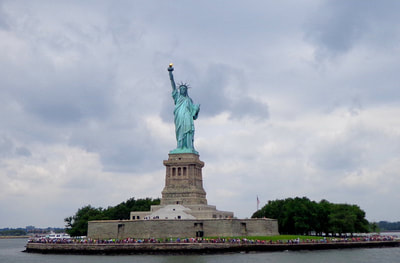 The Statue of Liberty was given to America from France in 1886 and have become a symbol of freedom recognized around the world. You have to book ahead to visit and book well in advance if you wish to go up the to the Crown and Torch as the tickets are limited.

It is 305 ft tall. There is also a display on the construction of this work of art. 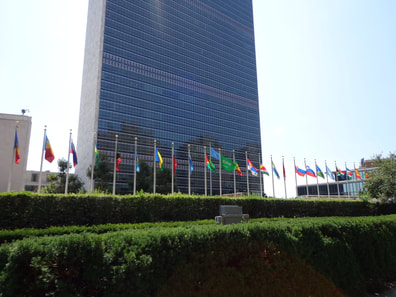 The United Nations was founded in 1954 and has over 189 nations that belong.  The UN Headquarters is in New York. It has its own stamps and post office.

You have to pay to visit this place. You are able to take pictures and need to have government ID in order to enter. 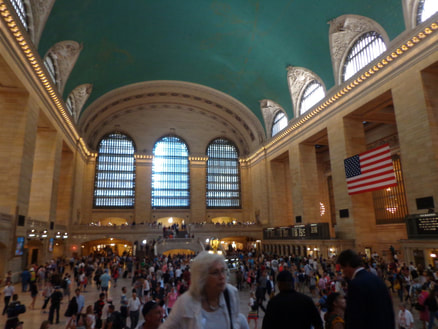 Opened in 1913, although the previous one was built in 1871 but was not big enough to accommodate the needs of travellers. It is a beautiful building.  It has a huge dining concourse that has something for everyone.

It is still very busy with more than 75,000 people using the terminals here. 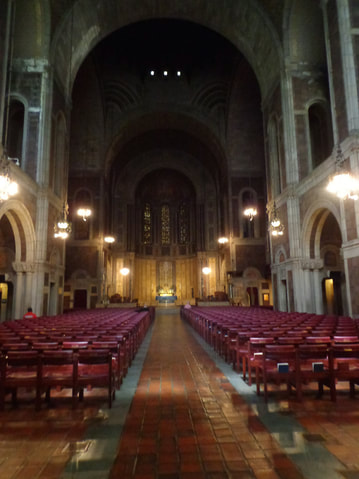 As a Catholic, St Patrick's Cathedral was a place I wanted to visit. It is the largest Catholic Cathedral in the United States. The cathedral can seat 2,500. It was built in 1878. It is built in the Gothic Revival style and reminded me much of Notre Dame. 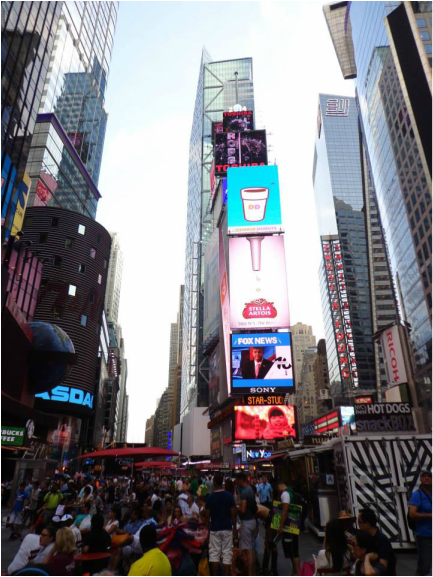 Times Square is a must if you are visiting New York City! It is seen on a lot TV shows and the New Year's Eve ball drops from here so its just a place you have to go. But be warned, it is very busy! There is also a Hard Rock Cafe nearby if you are looking for a place to eat. 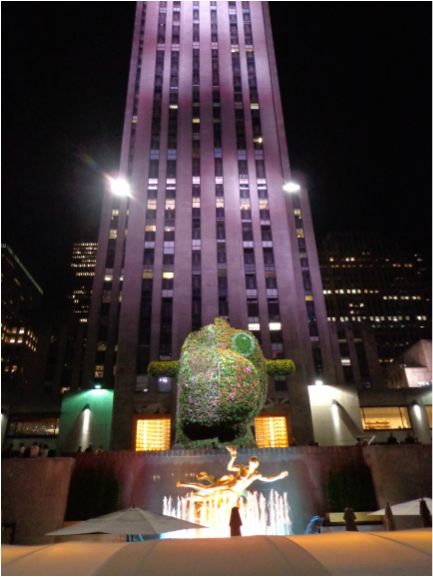 We decided we would go up the Rockerfeller Center at dusk so that we could see the Empire in the sun and at night. It was very crowded but worth it. Book in advance!

There is shopping, ice skating (during the winter) and has a variety of restaurants. 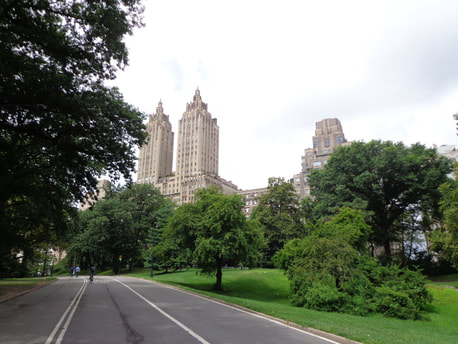 I knew that Central Park was big but I could never imagine that there would be a 843 acre park in the middle of New York City!

We rented a couple of bikes and took a ride  to take it all in.

You could spend the day here. 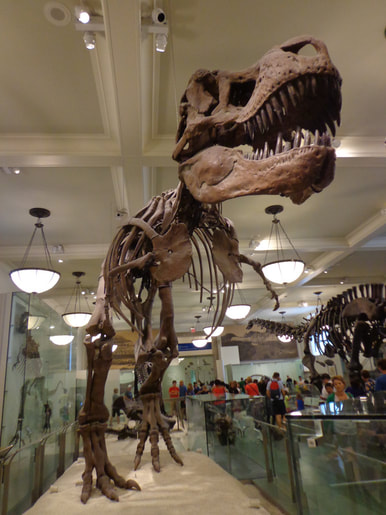 The American Museum of Natural History is located right near Central Park. So we locked up the bikes that we rented and took a tour.

We decided that we would do the Night at the Museum tour. This place was super busy but a great day out, especially for children. They have a suggested donation but we decided to pay what we wanted to.

It was originally opened in 1877 and has grown ever since. It has more than 30 million species and very nicely presented. 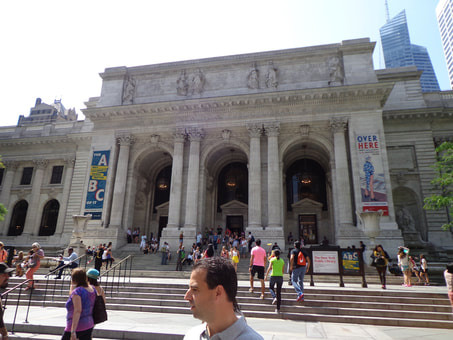 The New York Public Library was built in 1897. It hosts copies of Thomas Jefferson's handwritten copy of the Declaration of Independence and T.S. Eliot's The Waste Land. It is still very mush a place that is well used.

One thing that has stuck out in my mind about our visit here is that the original Winnie the Pooh was gifted to the New York Public Library in 1987. 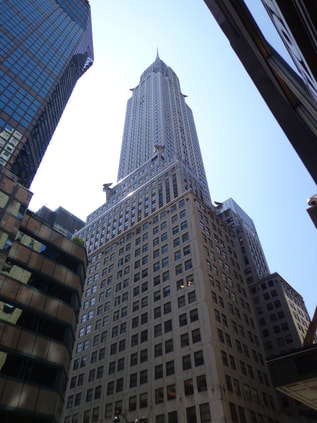 We decided to go up the Empire State Building during the day. You must book ahead because it is such a busy place.

It is the tallest skyscraper in New York (1454 ft). It opened in 1931 right after the Wall Street crash and it was the observatories that prevented the owner going bankrupt because it was hard to fill the offices with businesses at the time. 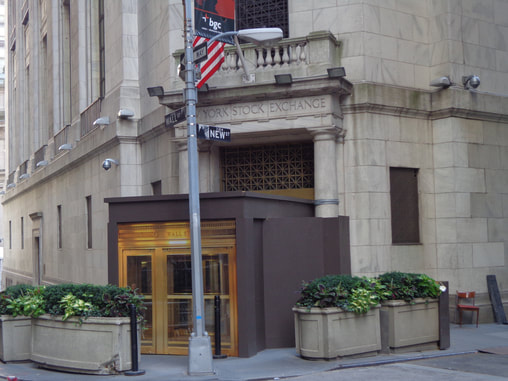 The basis for the New York Stock Exchange was setup in 1792 where a group of traders agreed only to trade with one another.

You are are unable to go inside for security reasons but nice to be able to walk outside of such an important financial center. 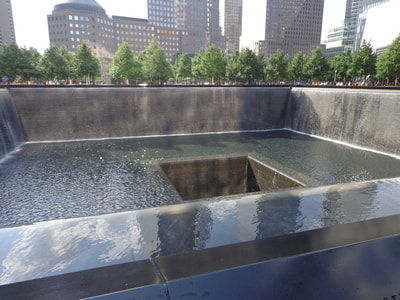 The 9/11 Memorial is built on the location of the twin tower buildings. It is hard to imagine any memorial that could pay tribute to the people that lost their lives that day. I think that this is perfect. It was a very humbling visit.

I can remember the day that this happened. I was stationed at Minot AFB and we were in the middle of an exercise. I did not have a T.V. at the time and my friends kept calling me to see if I was okay. I could not understand until I got work and found out. We went onto 24 hour ops for weeks at a time.

The world changed that day. If you are in the area, please come pay your respects. 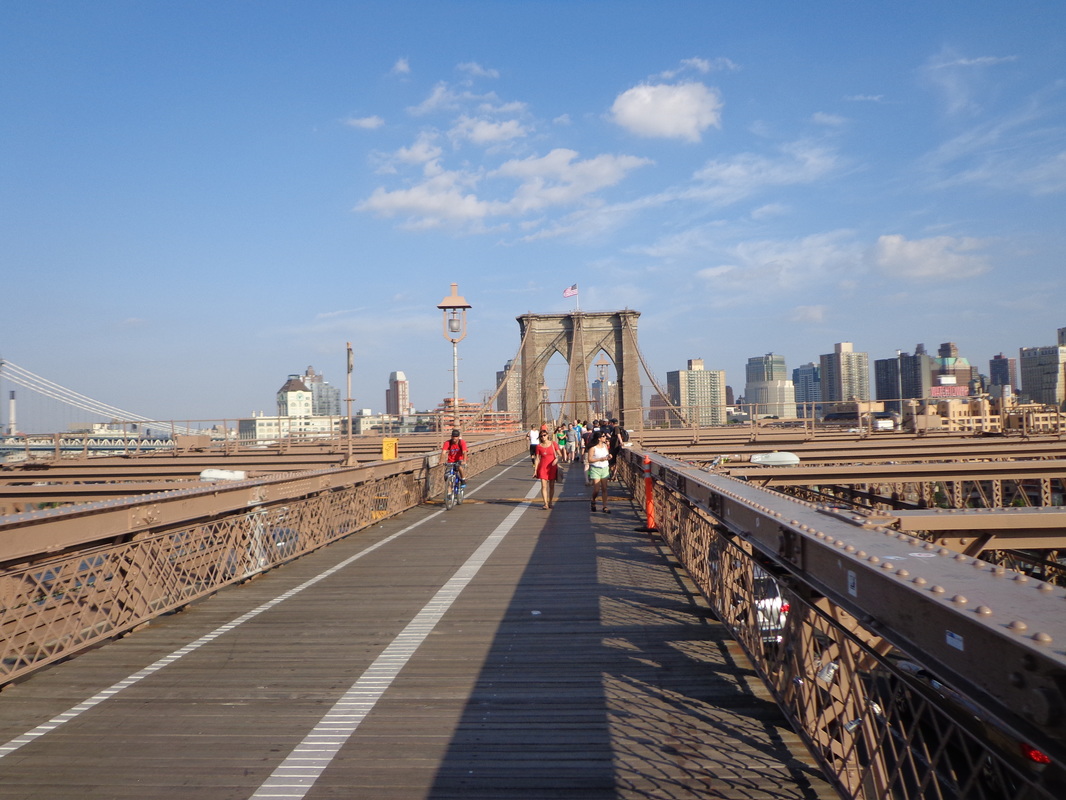 A visit to New York requires you to take a walk across the Brooklyn Bridge.

It was opened in 1833. It took 16 years to build. It was the largest suspension bride and first to be made of steel.