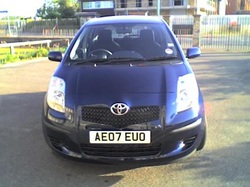 You probably already know that the British drive on the wrong side of the road, but they think otherwise. The reason they drive on the left comes from when knights were riding horses and needed to have their sword on the right side to attack any danger coming their way. Studies have shown that they have a lower rate of accidents because traffic is on the side of the dominant eye. We also drive on the opposite side of the English just to distance our cultures from each other.[i] There are 68 other countries that also drive on the left hand side.

"The Driving/Fuel Permit is the only license used to identify permanent party military personnel, Department of the Air Force (DAF) civilians, and their dependents on and off base. The Driving/Fuel Permit is valid for operation of a privately-owned vehicle (POV) on and off the installation for members of the force, civilian component, and their dependents, as the terms are used in the North Atlantic Treaty Organization/ Status of Forces Agreement (NATO SOFA)." [ii]

When I got out of the military, I had to get my U.K. driving license within a year of separating. This really opened my eyes to the dangers that Americans are put in and accidents they cause because of the limited amount of training received on-base. If you need more help, get a driving instructor for couple of hours. This could save lives. You can also practice on the weekends, nights and holidays if you are not confident in your driving as there will be less traffic.

The driving tests here are harder to pass and require a written and practical test. Most English learn how to drive using a manual because your license limits you based on what you took your test in. If you pass your test in an automatic, you can only drive automatics but if you take your test in a manual you can drive both.

You will get a briefing during your inprocessing when you get here and have a written test but here are some things you should know:

Speed limits are set by the type of road it is unless otherwise marked. What we would call a highway is usually 70 mph. The one lane country roads are 60 mph. Within town limits it is 30 mph, however, they are starting to reduce this to 20 mph in many areas. The speed limits do not change due to the condition of the road but you should always adjust your speed to the conditions. So if there may be sharp bends which you should take at a slower speed than the marked speed limit is the same. Expect to share the road with cyclists and motorcyclists who may weave through traffic.

You will see signs for speed cameras, followed by a camera in a yellow box. You must keep an eye out for this and try to avoid a ticket. If you are going more than the speed limit, the camera will flash. A ticket will be sent to the owner who will need to either pay the ticket or identify someone else if they were not the one driving. Make sure to return the ticket as soon as possible because delaying it can cost you up to £1,000. The points count against your U.K. driving license and if you get too many, your driving privileges can be removed. The British take speeding tickets seriously.

Finally, one thing you should know is that you can get gas (petrol) on-base and while you are traveling around the UK, you can get gas at RAF Croughton and RAF Menwith Hill. Make sure you check the opening hours on their website to make sure they will be open. If you have to get gas off-base, be ready for a shocker! On April 14, 2015, on-base, Super Unleaded per gallon cost $2.986 and Diesel per gallon $3.057. Off-base at the Newmarket Tescos the Unleaded per gallon cost $10.78 and the Diesel per gallon cost $11.25 per gallon.[iii] [iv] This would also be something that I would not boast about around the English. However, I do like to remind my family back home that they have it better than they think!

There is no good Samaritan law, so if attending to an accident, only do what you are trained to do and leave the rest to the professionals! Although no one has been prosecuted for helping at an accident.

In the local area, most roads are just one lane highways. Some of the roads are narrow, some congested, and some downright dangerous.  England has limited bad weather services for the roads, and very rural locations can be inaccessible for several days during snow; a couple of inches can make the country grind to a halt. Be prepared and choose a home close to a good, frequently used road so the snow or ice does not prevent you from getting to work. During the winter when daylight is shorter (8 a.m-4p.m.), be careful driving as some streets do not have any or limited street lighting. During the summer, the sun can rise at 4 a.m. and set at 11 p.m.

Lakenheath and Mildenhall sit on the southern edge of the Fens, roughly translated as drained swampland. To the southwest is Newmarket, southeast Bury St Edmunds and east Brandon and Thetford. Each area has a different type of road to access it, and while some housing might seem very close, it can take longer to get to base than from housing on a more accessible road.

Suffolk/Norfolk/Cambridgeshire have limited bad weather services for the roads, and very rural locations can be inaccessible for several days during snow; a couple of inches can make the country grind to a halt. Be prepared and choose a home close to a good, frequently used road so the snow or ice does not prevent you from getting to work.

During the winter when daylight is shorter, be careful driving as some streets do not have any or limited street lighting.

Some roads can get very congested at weekends, in the summer and over holiday periods especially the five ways roundabout near Mildenhall and Lakenheath. Road signs are not always as visible and not positioned as consistently as you would expect, and not always placed at every intersection. When driving through town, do not stop in a traffic junction box. These are yellow boxes painted at the intersection of stoplights. If you are caught in these, you can get a fine.

There are no-pass areas around the bases where American service members are not allowed to go around other vehicles due to the safety hazard. The only times you can pass on these roads are when following a tractor or other extremely slow vehicles. They are the A1101 between Bury St Edmunds and Littleport; A1065 between Brandon and the Five-Way roundabout; C620 between A1101 and B1112 (road through Holywell Row between Mildenhall and Lakenheath); B1112 between Methwold Hythe and Icklingham and B1107 between Brandon and Thetford, Wangford Road and Sedge Fen Road.

You might see English drivers flashing their lights at you which can mean several things such as indicating to a driver to go in front of them, to turn on your headlights if it’s starting to get dark, or police are checking speed ahead. 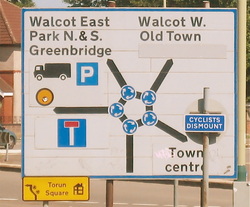 Don't worry this roundabout is in Swidon near RAF Fairford. A lot of Americans have experienced roundabouts in the States as they seem to become more popular but many admit that they don't work because most people don't know what they do or who they yield to.

There are also mini roundabout which are two roundabouts right next to one another. Take then one at a time and treat them like you would a normal one.

Here is a great page for information.

You can check find parking JustPark.

Most Pay and Display (P&D) parking lots only take coins. Be aware of parking restrictions on the streets to save you from a parking ticket. You buy the time that you need and put a slip on the dashboard or stick it to the window. You should look for posted signs for information.

Never park where there are double yellow lines or loading bays. Single yellow lines mean you can park there but there are restrictions such as time limits. You will notice there is limited parking almost everywhere in England. Remember many of the houses were there before cars were.

You should also consider Park and Rides when visiting bigger cities, they are parking lots outside of the city centers where you can hop on and off buses. They can also save you money on parking when visiting these places.

Later in the evenings, some parking become free which is very handy when seeing a show or heading into town for dinner.