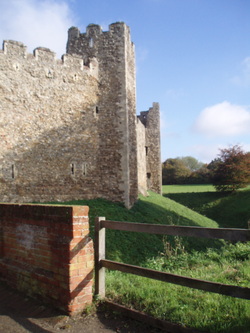 Framlingham Castle is a great day out for the family. It is only an hours drive from Bury St Edmunds. It is great fun for kids, very scenic and perfect for a day away. If you are an English Heritage member, its free!

Historically it is very interesting as well. Mary Tudor, daughter of Henry VIII and his first wife, Catherine of Aragon, became queen in 1553 after the death of her brother, Edward VI. This was very controversial for a few reasons, her mothers marriage was dissolved on the grounds that she was married to Henry VIII's brother and so he could marry his second wife. This lead to split between Rome and England and formed the Church of England and the monarch became the head of the church. Mary was Catholic and it was feared that she would return England to Catholicism. Mary went to Framlingham Castle until she was announced as the Queen.

The chimneys here are from the 12th century and Tudor and are the oldest in the country.

There is a free audioguide for this place and very useful. 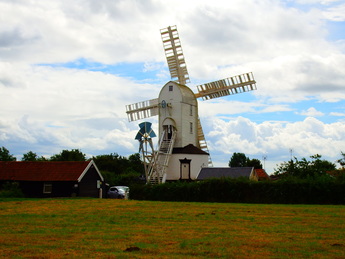 Saxtead Green Post Mill, an English Heritage property, is located 2.5 miles from Framlingham. This post mill dates back from 1796. It is a post mill which means that it rotates on top of its roundhouse base by the fantail to take advantage of the wind. This was the first I have seen like this but is a type that is commonly found in Suffolk and the style dates back to the 13th century. This mill has been rebuilt and raised three times and had the wood machinery replaced with cast-iron except the brake wheel in 1854. The mill was used to grind corn into flour for bread.

Commercial milling ended here with the death of the miller but has been kept in full working order.

Great quick stop especially if you are an English Heritage member. You would probably benefit from buying the guide book as very little signage.

I really liked climbing the steel ladder/stairs to the top part. Children will probably love climbing the ladders but parents will dread them as they are steep and there are many!

It is only open 12-5 pm on Fridays and Saturdays between Daylight Savings Time.