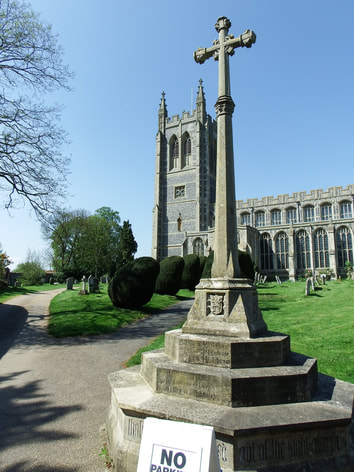 Long Melford is a tiny village about 20-30 minutes south of Bury St Edmunds. It is a great day out, spending about a half a day at Kentwell Hall, have lunch or tea in the village, popping in the many tiny shops, visit to the church that looks down  and 1-2 hours at Melford Hall.

Like many other villages in the local area, Long Melford was a wealth wool town. You can tell this by the huge church at the top of the hill.

There are many shops in this village which are worth popping in to include antique shops. The shops here are a mixture to support the local population and cater to tourists.

The church is a lovely building. It was built in the 15th century. Most of the glass that you can see here is medieval. The tower is modern, built in 1903, replacing the one that was struck by lightning. 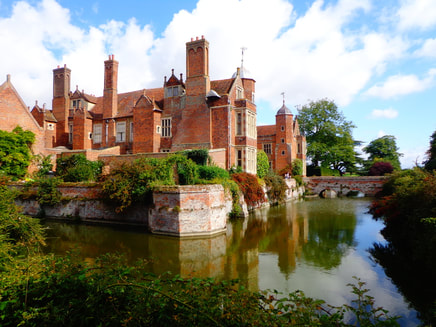 Kentwood Hall is located in the the lovely village of Long Melford in Suffolk. I had the opportunity to visit this property on one of their Tudor Days. This was great because the actors really bring the  place to life.

The house foundations date back to 1385. It still has many of the original features as well as an eclectic collection that show the changes over the years.
​
This place was much bigger than I expected and so if you come on a day that they have an event on, I would say plan to stay for the day.
​
They also host Scaresville, which will satisfy your appetite for some Halloween fun. 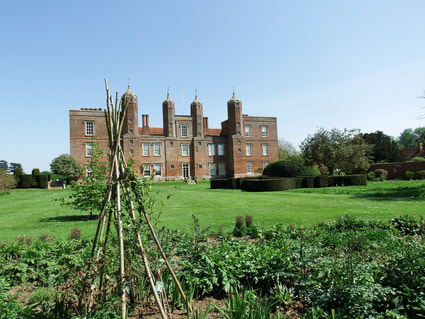 Melford Hall is a National Trust Property in the village of Long Melford.

I had intended in visiting this property the same day I visited Kentwell Hall but life got in the way and I only had time for one.

A day could be well spent in Long Melford by visiting Kentwell Hall (give it a half day), Melford Hall (1-2 hours) and then a stroll or lunch in Long Melford.

I think that Melford Hall is often overlooked as far as National Trust properties go in the local area. I found the historic context very interesting.

Sir Harry Parker, 6th Baronet, was the person who Melford Hall's story began with. His brother, Sir Hyde Parker II, earned his knighthood for his part in the Hudson River campaign in the War of Independence.

Sir Parker was disobeyed by Capt Horatio Nelson, the guy on the top of the column in Traflagar Square. There was a campaign against Copenhagen. Sir Parker had raised the flag to give the order to abandon the mission but Nelson put the telescope to his blind eye and said that he could not see the order. Nelson won against the Dutch.
During World War II, the property was commandeered by the army and the family moved to a house across the green.
Beatrice Potter was a regular visitor to the property because she was the cousin of the baronet. She would try her stories on the children. You can see the real Jemima Puddle-Duck and see the room she stayed in.

There have been royal visitors as well, Queen Elizabeth I, Edward and Alexandria, Queen Mary and Princess Margaret have all come the visit at one time or another.

Melford Hall has a tea room and space to sit outside when the weather is lovely.

​They have story bags which you can sit out on the lawn and read a book. The nursery has items that you can really play with. There are also quizzes for children to look for particular items on their visit.