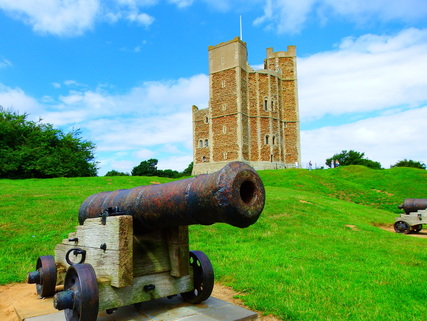 Orford Castle, an English Heritage property, was built by Henry II between 1165-1173 for coastal defence. It is England's most complete keep. It is also unusual becuase those built earlier were square and those after are round.

The tower is 18-sided and has three square turrets on the top. The views from the top are lovely.

The Orford Museum hosts Roman jewels, medieval seals and other items. During the Second World War, it served as a radar station.

Children will love climbing the stairs and going through all the rooms. Also there are two canons outside for them to climb on.

I highly recommend listening to the audio guides as there are no signs around the property telling you what you are looking at.

There are no bathrooms at this property but there are some in the market area or in the car park near the quay.

You could make this a day out by wandering the village and going to Orford Ness. I am going to go back to visit this National Trust Nature Reserve another day.