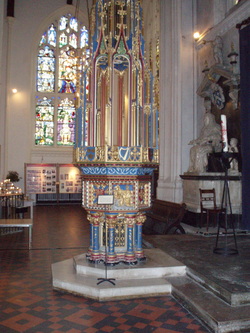 Bury St Edmunds is a medieval great town dominated by the Abbey which dates back to 1020. In 1214, King John accepted the terms of liberties that were granted to the people which are known today as the Magna Carta.[i] It was also the home Bartholomew Gosnold, who sailed with John Smith and founded Jamestown, the first successful permanent settlement in the USA. He has named the famous place in Cape Cod, Martha’s Vineyard after his daughter, Martha.

These are pages that cover the East Anglia area: 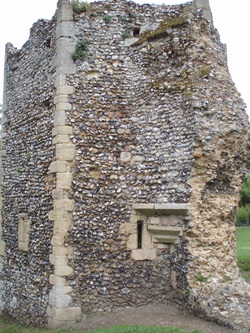 Bury St Edmunds Abbey Gardens are beautiful to visit in the summer in all its glory.

The abbey was named after Edmund who was crowned king when he was 15 years old in 865. He was fighting the Danes when he had to retreat. He was caught and refused to renounce his Catholic faith and was slained. Bury St Edmunds became a pilgrimage place for worshipers and a great Abbey was built in the 12th century but was destroyed during a riot between the Benedictine monks and the townspeople. The Abbey gate was rebuilt next to the previous one.

An interesting fact about Bury St Edmunds is that Captain Bartholomew Gosnold, who came from here, went to America and named Martha's vineyard after his daughter.

St Mary's Church is one of the largest parish in the country.

After the reformation (breakdown between the Catholic world and England), the dissolution of monasteries occurred and many of the stones were used for other uses. Only St John and St Mary's church, Abbey gate and the Norman Tower survived.

During WWII, 1 in every 7 people in Suffolk were American due to the 19 airfields that were built in Suffolk's fields. There is a garden dedicated to the 94th Bombardment Group in the Abbey Gardens.

During the summer, they have concerts but this is a nice place for a walk as well. There is plenty of room for the children to run around and it has a playground and avairy as well.

So pack a picnic and get out there! 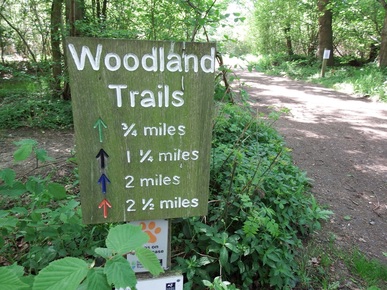 Bradfield Woods is actually out of Bury St Edmunds but I thought I would put it here. I visited here in search of bluebells but I was too late.

It is a lovely place for a walk and dogs are allowed on leads. They also have many events aimed at children, families and adults. Its a hidden gem that I thought I would share. 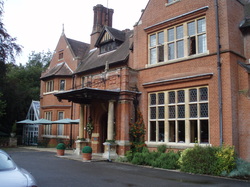 Looking for a girls day out or a relaxing day? I recommend the Clarice House in Bury St Edmunds.

As you may know Jane and I do these long walks. We took part in a marathon walk and received a coupon each to go to the Clarice House with a friend for free. We brought our friends, Sara and Helen.

It was a lovely place. Just walking inside the building was pleasing to the eye as it is very elegant. We swam in the heated pool, sauna and hot tub. You can order food and workout as well. I had a massage and it was lovely! 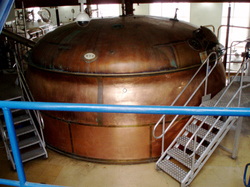 While you are here, a nice activity is the Greene King Brewery in Bury St Edmunds, which has been making ale since since 1700. They are one of the main brewing companies in the country and run over 2,500 pubs in the UK.

Jon and I really enjoyed it and planned a day out in Bury St Edmunds around it.  Jon's favourite ale is Ruddles County which is made here. I really enjoyed tasting all the ales and learning about them even though I am not a beer drinker. We have been on many beer tours in the States but I think this was my favourite.

Please see the Greene King Brewery website for dates and times of the tour. 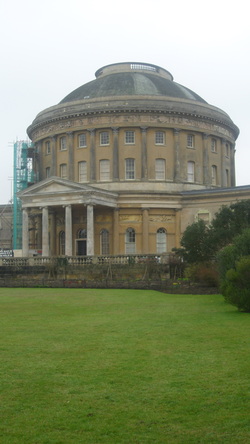 Ickworth House outside of Bury St Edmunds is a great place to take the kids, the dog or just yourself for a walk. It costs to park there unless you are a National Trust member. If you are going to be visiting a lot of NT places, it is worth looking into joining as it could say you money.

The Ickworth House was started in 1795 but finished in 1829. The Italian inspired Rotunda is very picturesque and is a must see.

The Ickworth House has fabulous 1800 acres of conservation woodlands which have livestock (mainly sheep) grazing. In the spring, you will be able to see lambs following their mother around.

It also has a vineyard where the award winning wines started.

There are nine walks to choose from so that you can see all of the grounds and also choose what suits you and your family. there is even the Trim Trail with exercise stations.

I like to take Dusty and walk around the estate.

There are events for all ages being held throughout the year. 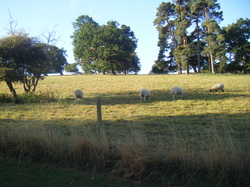 Looking to take your children to somewhere in the outdoors? Lackford Lakes is the place.

Although you cannot bring your dog, you can take a walk around and see nature as it should be with beautiful flowers and amazing wildlife. There are otters, ducks and dragonflies!

They have regular events and courses for adults and children. These cost money but other wise it is free to visit.

This is a great place to bring the children, they can watch the feeding stations from the visitor centre which also has a children's area to enhance their learning. There are also circular walks that are available to stretch the little legs and tire them out.

How lucky are we to have something so close! 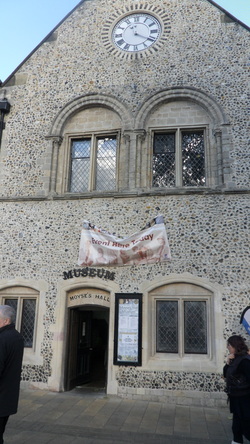 Moyse's Hall is a great place to take the children to help them learn about local history. They have events where children can do crafts and try on clothes. The nice thing about this place is that it is very children friendly museum so you don't have to  worry about them breaking anything.

You can also buy a heritage ticket for £7 which provides you with unlimited visits to West Stow and Moyse's Hall. See more here.

Find out what they have going on here. 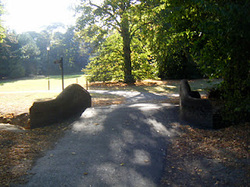 Nowton Country Park is a great and free place to take the children that is open all year round.

It has a children's play area, maze and a few different walks that you can take over the 200 acre property. Dogs can be taken there but must on a lead.

It just shows you there is plenty to do without having to take the children to a theme park, all you need to do is pack a picnic and load them in the car!

That is what I love about the English, they appreciate their parks and spend time with their children. So get out there! 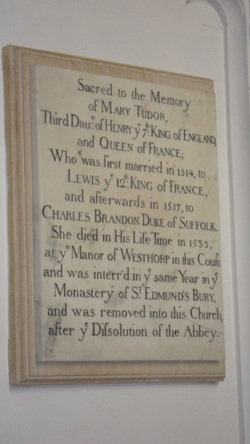 St Mary's Church is the third largest parish in England. It has the second longest aisle and the largest west window. It was built 1120-1148. It has a Hammer-Beam Angel Roof. This is very beautiful and I was told by a member of the parish that they light them up only once a year in the Advent service so its worth going then. I wasn't able to get a very good picture of the beans but they are very impressive.

Mary Tudor, Henry VIII's favourite and younger sister is buried in this church. Mary was told by Henry VIII that she would be able to marry whom ever she like but he made her marry to the king of France but he died 2 months later. Then she was able to marry her true love, the 1st Duke of Suffolk. Although she did this before she came back from France. It is an act of treason to get married without the king's approval and so they had to plead with Henry VIII to allow them to be married. He took all the money and presents she was given when she was married to the King of France.

Queen Victoria donated a stained glass window to commemorate that a member of her family is buried here.

Their choir is one of the oldest in the country. It is an all male robed choirs dating back 500 years. They often hold Evening Songs and concerts, so check out what they have planned here.

If you are in Bury St Edmunds, I recommend popping in to see this hidden gem. 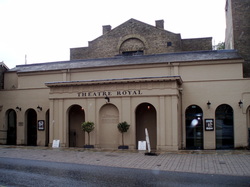 Theatre Royale is England’s sole surviving Regency playhouse located in the centre of Bury St Edmunds across the street from the Greene King Brewery. It is actually owned by Greene King and was used for many years as storage for kegs! It has been restored to its 1819 original state and the atmosphere is amazing.

Jane and I like to go here to see plays. It is often cheaper than the Cambridge Corn Exchange or the Cambridge Art Theatre and they often have the same shows. You can get the cheap seat tickets and you still feel like it’s an intimate setting. I think its exciting and love the look and feel of going to the Theatre Royale. They often have an intermission with two bars to get a drink and have a chat.

As with all theatres it is best to get on their mailing list or keep checking their websites as their tickets go quickly. The nice thing about this theatre is there are some cheap seats on the second floor nearest the stage. Often if the other boxes are empty, you can usually move.

They have a lot of different shows such as plays, dances, pantomimes, something for everyone. Check out the productions they are running and see what I mean! 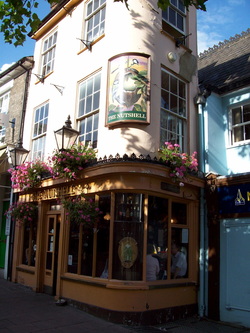 The Nutshell is Britain's smallest pub and is located in Bury St Edmunds. It is owned by Greene King.

Its right off the market square and always looks busy but I guess it would since it is so small.

So go have a pint in the smallest pub in Britain. 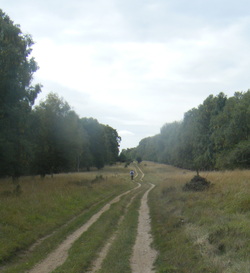 West Stow is an Anglo-Saxon village near Bury St Edmunds which is where you can walk around and see how they may have lived. It has been reconstructed on an area that was previously excavated.

They have a lot of different events and because you can touch and try the furniture and other items out it makes learning about them fun!

You can get an unlimited visit Heritage ticket for a year for both West Stow and Moyes Hall for only £7, a great value!

Also if you park a bit further down the road you can walk around the many paths in the West Stow Country Park.