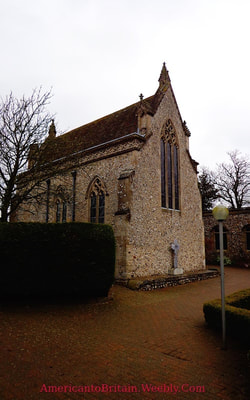 Walsingham is England's Nazareth. this was a very important place before the Reformation and has rediscovered its importance in the 1960s. It was one of the four places of pilgrimage for Christians in the Middle Ages.

The Shrine of Our Lady of Walsingham was established in 1061. Richeldis prayed to the Virgin Mary who appeared to and guided her to rebuild a place in memorial to the Annunciation.

Its importance grew and it has been visited by kings Henry III (1226) to Henry VIII (1511). Henry VIII even took part of confessing his sins at the Slipper Chapel and walking the mile in slippers to the Holy House. He also gifted the monastery red candles which were expensive at the time. After the reformation, he took back the candles and the property was confiscated.

After the reformation, it was no longer a place of pilgrimage. The Slipper Chapel was bought in 1896 by Charlotte Pearson Boyd and was restored as a Catholic Church.

Now the Roman Catholic shrine welcomes about 25,000 people a year. Every weekend of the summer, they welcome different pilgrims and it is good to come here on religious holidays such as Good Friday and Easter.

This is also a place of importance for the Church of England. The Shrine of Our Lady of Walsingham also welcomes many people.

For such a small village, it is very serene place. It is worthy of a visit, tied with an afternoon at the seaside.